The UK’s premier wartime group, The D-Day Darlings, were signed to Sony Music UK after reaching the finals in ITV’s Britain’s Got Talent. In 2018, their debut album, “I’ll Remember You”, reached number 15 in the official album charts, receiving a Silver Disc for over 60,000 sales.

As the best-selling female group to emerge from Britain's Got Talent, the Darlings received a BRIT Certified Breakthrough Award in 2019 and have since performed alongside a host of celebrities such as Michael Ball and Pixie Lott, appearing on prime time shows for Radio 2, Heart FM, ITV and BBC, with a special performance for members of The Royal Family.

Working with top music producers and songwriters, the Forces’ favourite sweethearts honour heroes with a selection of stunning original songs and reimagined arrangements of popular wartime songs, bringing the sound and sentiment of the era up to date.

With their patriotic energy and passion for celebrating veterans through their work in the UK and overseas as proud ambassadors of the Royal British Legion, along with the support of their biggest inspiration Dame Vera Lynn, the Darlings have earned a strong global appeal.

"I am pleased to support The D-Day Darlings".
Dame Vera Lynn 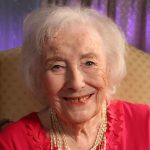 Classy, authentic, genuine, respectful, beautiful and amazing! The vocals and harmonies have been great.

Most incredible celebration of this country, it's nice to have a job where you can say thank you. Absolutely wonderful, beautiful performance.

I’ve loved you from the minute you walked on stage, you sang it beautifully and you all look amazing. It was Fantastic.

It’s so important that we remember people, keep their spirits alive and you do that brilliantly. Most polished act, vocals are just perfection, you sounded absolutely wonderful.

We think the song 'sweetheart' is absolutely beautiful and so appropriate for my Mother.   Katie has definitely caught the feel of my Mother's sincerity towards this Country and the rest of the world.